Shedding light on the fragile nature of peace and the strength of those who sustain it.

Paper Peace was an ambitious arts and heritage project conceived and delivered by Emergency Exit Arts (EEA) between 2017 and 2020, to mark the centenary of the Armistice and peace treaties which marked the end of the First World War. The project aimed to engage communities far from EEA’s south-east London base, and was undertaken in partnership with B Arts (Stoke-on-Trent), Bradford Peace Museum, Brick Box (Bradford), Creative Scene (Kirklees) Ideas Test (Medway) and Vivacity (Peterborough). It had three distinct phases:

Paper Peace was a huge challenge – much greater than EEA or its partners had anticipated. It was the most ambitious project that EEA had yet taken on, requiring large human and financial resources and the organisation of a complicated network of partners and activities. 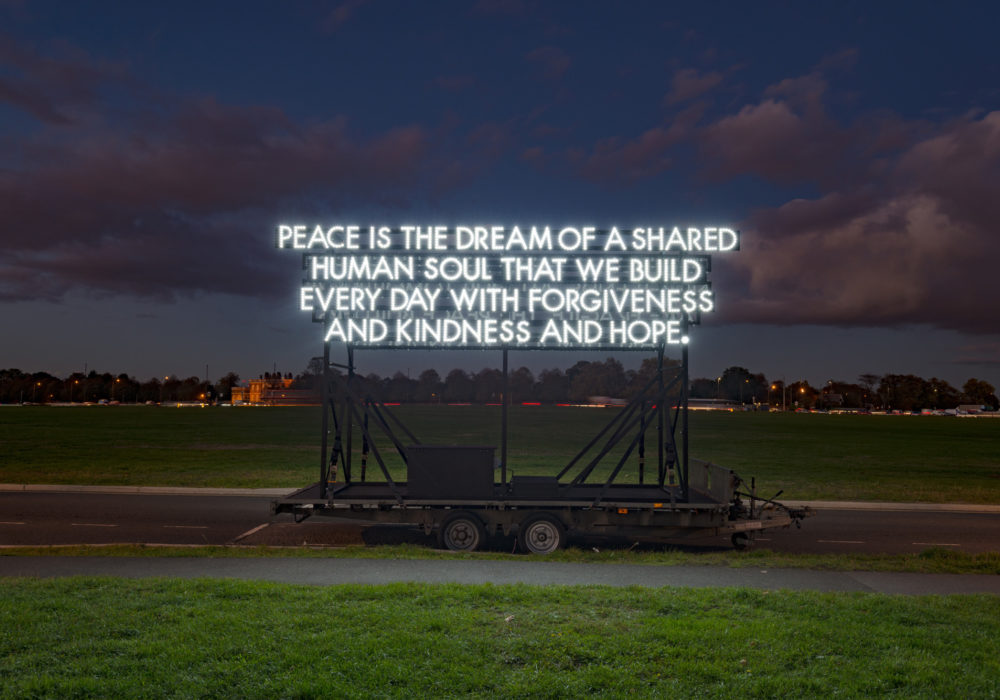 Paper Peace was conceived by Emergency Exit Arts as a contribution to the national programme marking the Centenary of the First World War. It was intended specifically to mark the end of the conflict and the efforts of peacebuilders after ‘the war to end all war’, which sadly proved to be no such thing. The main aim of Paper Peace was to build commitment to peace-making as an everyday act taking inspiration from those who have endeavoured to build peace over the last 100 years.

The project was inspired by, and worked with, the concept of Positive Peace developed by Johan Galtung, the main driver of the discipline of peace and conflict studies. Positive Peace links peace with justice and equality for all. It is more than the absence of fighting or war and will take all of us working together to make it happen.

Paper Peace was conceived as a national project, just as the Armistice and peace itself are national concerns. That was reflected in the network that included partners in Yorkshire, the East of England, the Midlands and the South East, as well as London 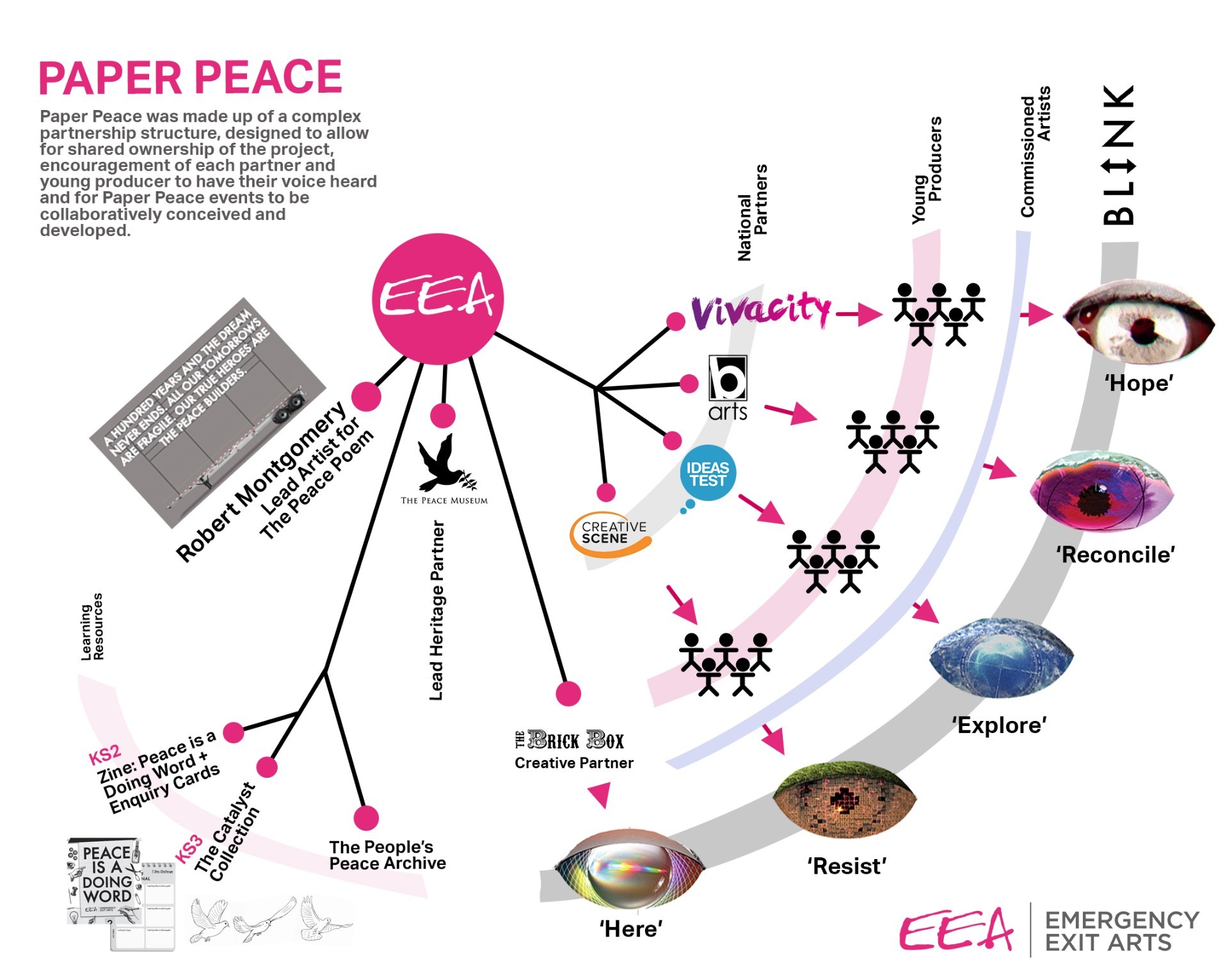 Paper Peace’s partnership structure was designed to allow for shared ownership of the project, encouragement of each partner and young producer to have their voice heard and for Paper Peace events to be collaboratively conceived and developed.

The EEA team led the partnership managed its central planning and administration. Each Producing Partner recruited 10 Young Producers, aged 18-25 who, over the course of a year, received training in creative producing outdoor events and researched the history of peacebuilding in their local area and within a national context.

The Peace Museum in Bradford, as Lead Heritage Partner, offered access to their collections, guidance and advice on heritage aspects of the project. Each Producing Partner also worked on local research with heritage organisations in their area including:

The partnership also included a number of individuals as associates, Chloe Osborne, leading on the Young Producer’s programme and later Creative Director for Blink; Rūta Irbīte, who worked on the Blink structure and Nina Dunn (projection mapping); Robert Montgomery, co-creator of The Peace Poem; and François Matarasso, who advised on project evaluation.

The Peace Poem was created with leading artist and poet Robert Montgomery, and was seen by hundreds of thousands of people as it travelled along motorways to cities across England. This 12ft high illuminated artwork began its tour Monday 12th November 2018 – the day after the 100th anniversary of the Armistice – stopping in London, Coventry, Nottingham, Stoke-on-Trent and Dewsbury. At each destination we invited visitors, passers-by and others to share stories, pledges and poems of peace for our National Peace Archive, working with local communities and artists to explore what peace means to us today.

The Peace Poem was a successful artistic collaboration that has proven to be flexible, well suited to touring and able to be taken into every space we have aimed for, proving it to be a highly versatile piece of work. A highlight of this stage of the project was the success in reaching areas of low engagement and the response from audiences on the ground who enjoyed seeing work presented in their local area. We also know that a number of the Young Producers who went on to participate in the project were inspired to join because they experienced the Peace Poem in their town or city. These strategies were successful in reaching diverse audiences as well as helping each local partner developing new connections and a better understanding of those audiences. This helped partners anticipate issues for the next stages of the project. As the first phase of Paper Peace, the Peace Poem tour successfully achieved its aims and built audiences and learning for the second phase of the project. 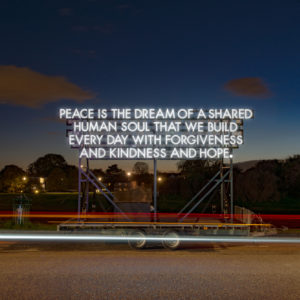 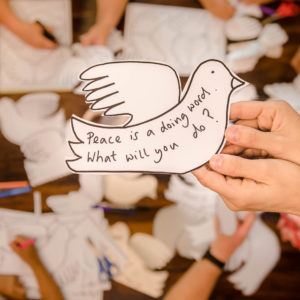 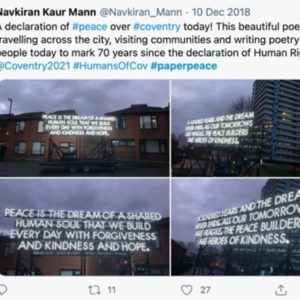 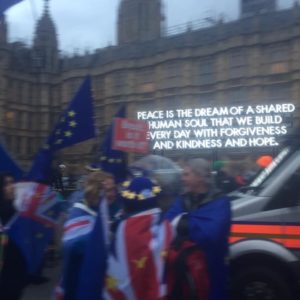 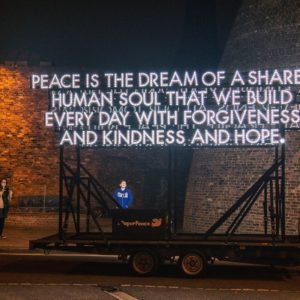 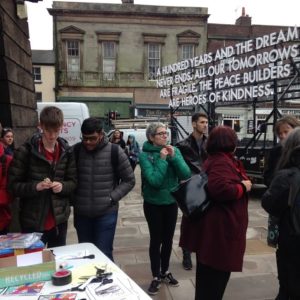 One of the core goals of our Paper Peace Young Producers programme was to diversify professional participation in the creative sector. The partners recognised that to create a sector that better caters for our communities we need to act differently, to know rather than assume, to discuss rather than direct, to be representative of Britain today and able to facilitate meaningful artistic experiences which help us all to better understand our world and to imagine new futures together.

EEA worked with the Producing Partners to develop the Paper Peace young producers' methodology, drawing from EEA’s prior experience of delivering high impact young producer programmes that span the heritage, social and arts sectors and responding to the specific barriers encountered by young people in each of the partners’ local areas and their substantial combined creative expertise. 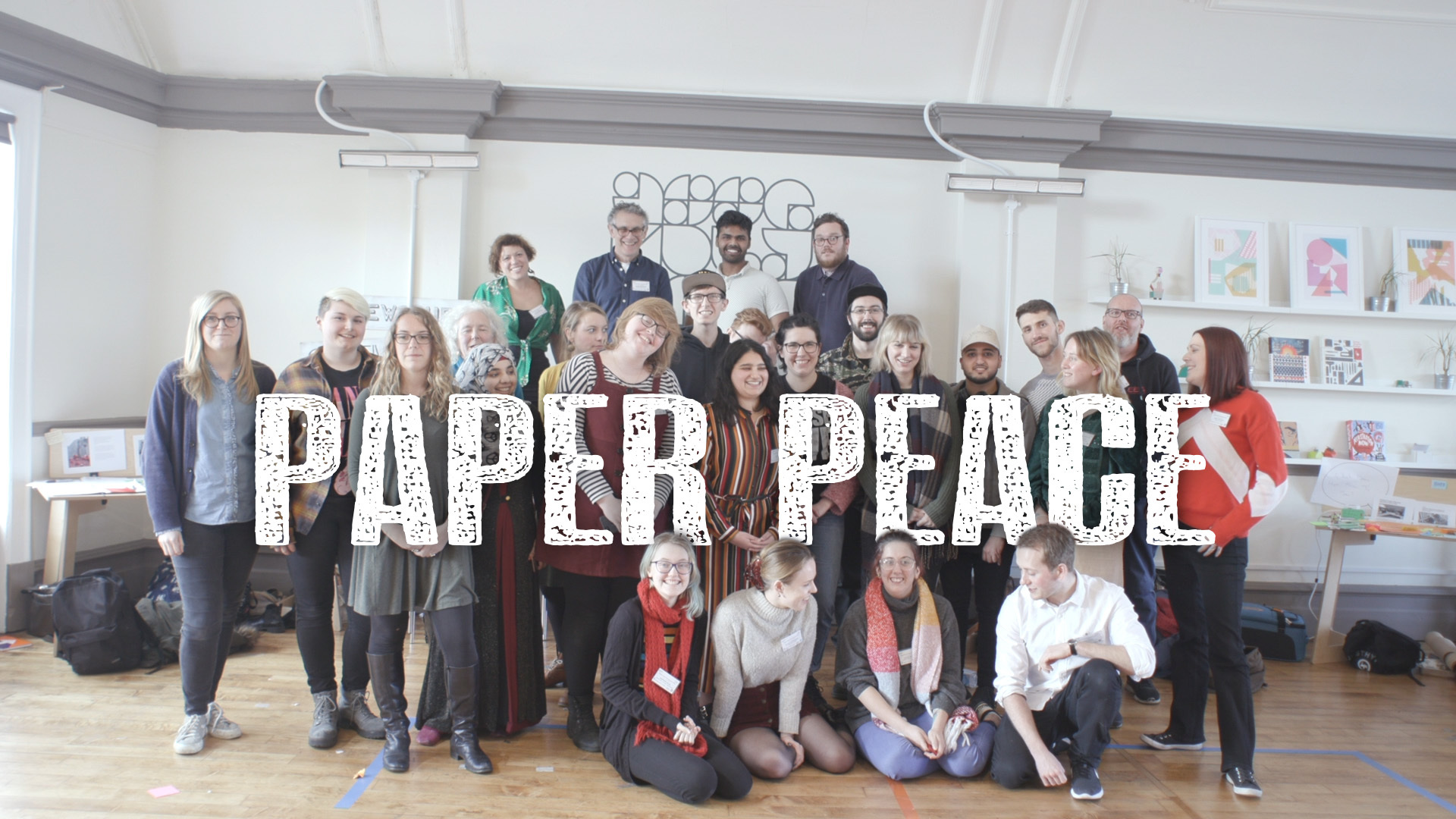 Each of the Producing Partners was responsible for the recruitment of their young producer cohort, buoyed with collectively developed resources and in response to the specific needs of both their organisation and local community.

The combined cohort of 39 young people explored their understanding and experience of contemporary peace alongside the heritage of peace-making in the UK. Their identified interests, local research and shared modes of enquiry informed the structure, themes and intention of the finale show. Their choices of content, artists and activities and its content created the audience journey through what became Blink.

Central to the Young Producers’ experience was undertaking research into the local heritage of peace-making and producing learning resources to support the Paper Peace engagement activities.

This research informed and contributed to the creation of the Learning Peace Pack with Chloe Osborne applicable for in school and informal education. They are suitable for youth service provision, youth clubs and alternative provision. The format is black and white to make photocopying cheap and easy, and a 'How To Guide' offers information about the resources, and how they might be used. The principal resources are:

BLINK brought together the wide spectrum of lived experiences and different perspectives on peace-making encountered during The Peace Poem tour, the peace heritage research undertaken in and between each city, and the new ideas and capabilities of the Young Producers, to present Blink, an engaged vision of peace in a final interactive installation in all the Paper Peace locations. Blink was a spectacular touring outdoor show formed of five interconnected eye-shaped pods, with animated eye projections on the outside programmed to follow passers-by, and a central piece called The Alternative Peace Monument, where visitors ended their journey, which was constructed with eternity mirrors to reflect our individual and collective responsibility for Positive Peace within our communities and beyond.

The four groups of Young Producers had commissioned and then produced artists in their areas to create an immersive work in response to their ideas. The artistic commission was to respond to and reflect on the local peace-making heritage whilst drawing attention to the uniqueness and diversity of each place. The fifth piece was created by Creative Partner, The Brick Box and the whole experience came together as Blink with Chloe Osborne as Creative Director.

BLINK was very well received by the audiences with long queues in the cold and very good feedback. Many people expressed astonishment that something of this scale had appeared on their doorstep. 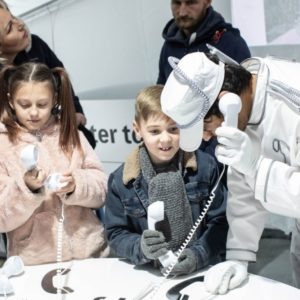 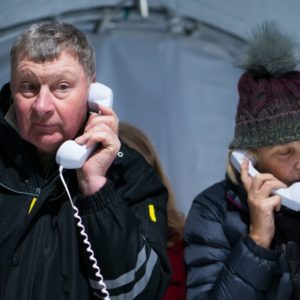 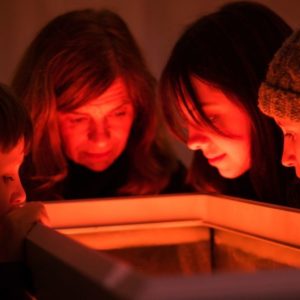 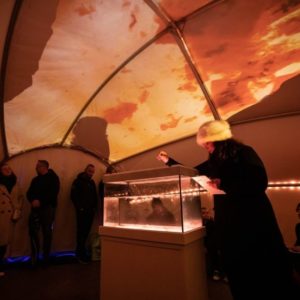 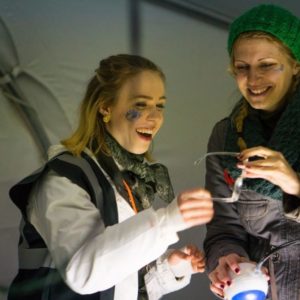 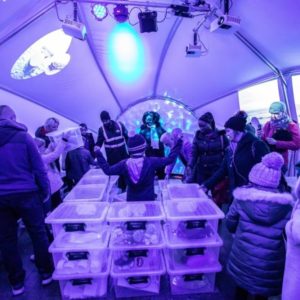 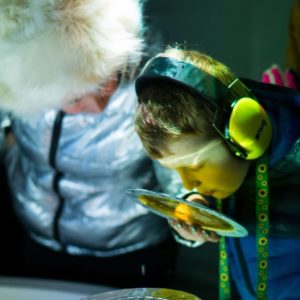 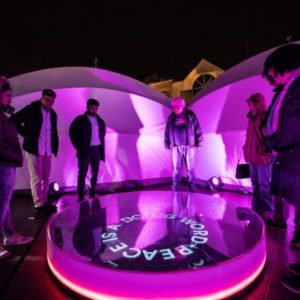 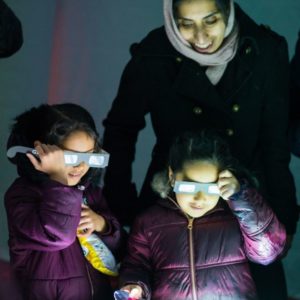 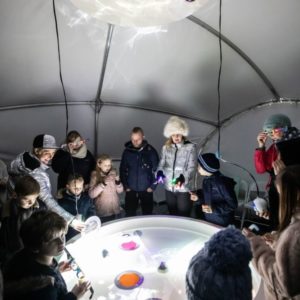 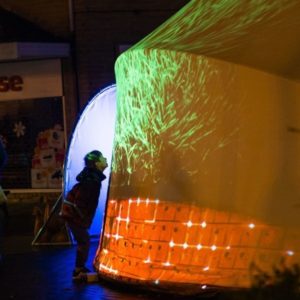 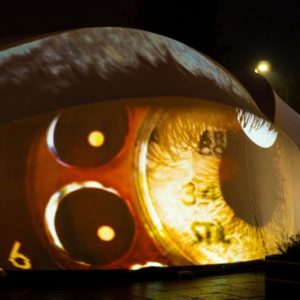 For this event we prioritised attracting new and different audiences to come and take part in the experience. This intention was embedded throughout Blink, starting with our print marketing campaign and including the signage during the installation which included the five most spoken languages across all touring regions after English: Polish, Lithuanian, Urdu, Punjabi and Arabic.

With Blink and Paper Peace as a whole, we wanted to develop a piece of work with and for areas of the country that less often benefit from big-scale productions and art projects. Several visitor comments pointed out at a clear hunger for more arts and culture in these parts with encouraging messages including ‘More like this in Peterborough’ or ‘Stoke-on-Trent needs more. Turn out on a rainy night. People are here’. We succeeded in reaching new audiences with a striking 22% of visitors interviewed in Dewsbury declaring that they had never attended an arts event before.

‘(I feel) more hopeful. and the wide range of people did come along. I’ve been to events before and sometimes you see the same faces. There’s a big widespread of people here.’

‘We worked with a lot of other people that we don’t know, and (my daughters) have never really done something like that because they are quite shy and to work with other people on a project. I think that’s something really great that we can take away from’

Paper Peace was created by Emergency Exit Arts with a brilliant team of partners and artists to make this project happen.

This project is supported by our brilliant funders Arts Council England, Heritage Lottery Fund and the Roddick Foundation. We cannot thank you enough for your guidance and support throughout this project. Not forgetting of course everyone who plays the National Lottery Players for making this possible.

Made possible with support from: 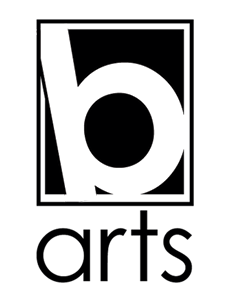 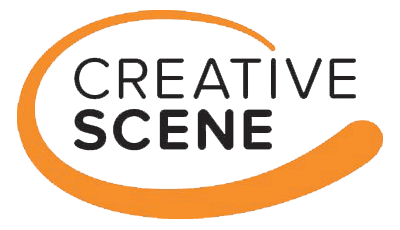 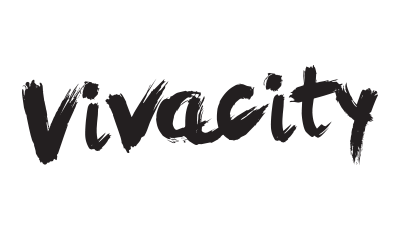 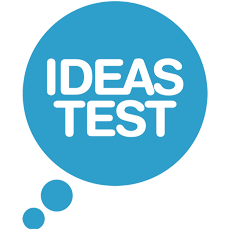 Cookies help us deliver the best experience on our site. By using our site, you agree to our use of cookies. Learn more Got it